Text reproduced with kind permission of Marc Geagan and taken from his book “Dancing By The Sea – A Journey Through Time in the Bundoran Area”.

On September 30th 1957, at 2.30pm on a Monday afternoon the last train slowly pulled out of Bundoran station. Hundreds of tearful onlookers gathered to witness the historical event. Ninety-one years after the first train pulled in an iconic development in Bundoran’s history was ending. The first train arrived at Bundoran railway station on the 13th of June in 1866.

Over the course of its existence the Bundoran Line brought vast numbers of tourists into the town. Goods such as livestock, coal, building materials and food were also brought in on the train. Farmers used it to bring their cattle to markets. GAA enthusiasts used it to go to Dublin for the All Ireland Final or Clones for the Ulster Final. The British Army used the train to bring soldiers to Finner Camp. The famous Bundoran Express ran in the summer to bring the extra volume of tourists to Bundoran and ferry pilgrims to and from Lough Derg. The Bundoran Express sometimes operated in conjunction with the Lady of the Lake, sailing between Enniskillen and Castle Caldwell. 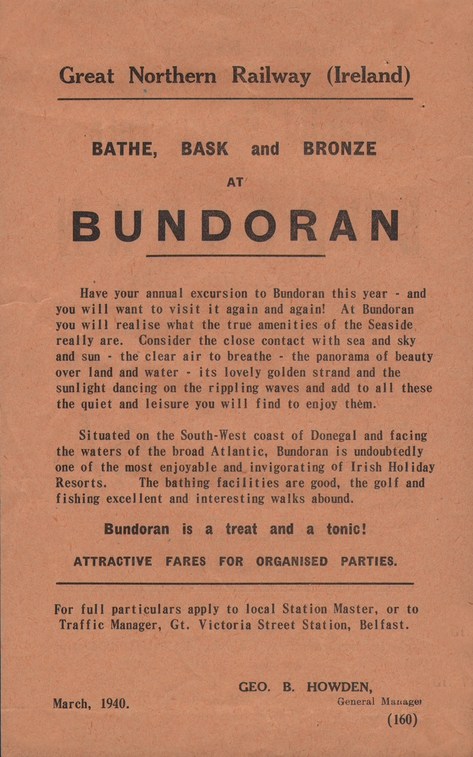 The line went from Bundoran to Ballyshannon, Belleek, Castle Caldwell, Pettigo and onto Bundoran Junction near Irvinestown. The train could then change direction and go towards either Omagh or Enniskillen. The boom years lasted from the end of the 19th century until the end of World War I. The intervening period between the wars was mired by economic depression following the Wall Street Crash of 1929. By the end of World War II, the Great Northern Railway Company was in severe financial difficulty. In 1953, both Governments felt compelled to nationalise the company and it became the Great Northern Railway Board. The Northern Irish Government closed most of the G.N.R. lines in 1957. This effectively rendered the 13 km line from Belleek to Bundoran redundant and it was subsequently closed. 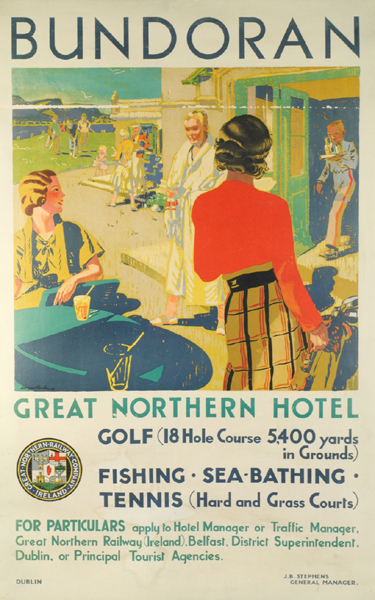 In 1842, there were just 31 miles of railways lines throughout Ireland. By 1850, this had been extended to 700 miles. In the 1860s, the railway lines continued to spread out all over Ireland. The Irish North-Western Railway joined with the Enniskillen and Bundoran Railway Company to build a 36-mile line from Bundoran Junction (then called Lowtherstown) to Bundoran, which opened in 1866. Plans were made to extend the line to Sligo. The extension was authorised in 1862 but this never materialised. This would have opened up the Atlantic Corridor enabling people to travel from Derry to Limerick by rail. Many of the various private railway companies operating in the north of Ireland amalgamated in 1876 to form The Great Northern Railways Company (G.N.R.).

The arrival of the railway had an unprecedented economic and cultural impact on the town of Bundoran. The establishment of the railway line led to Bundoran experiencing the most spectacular rate of population growth in the whole of Ulster. This trend was sustained as the town continued to grow during the first years of the 20th century. Living standards for the people of Bundoran improved dramatically. Many locals found employment with the railway company. The increased volume of tourists led to the establishment of new businesses in the town, providing more local employment opportunities. 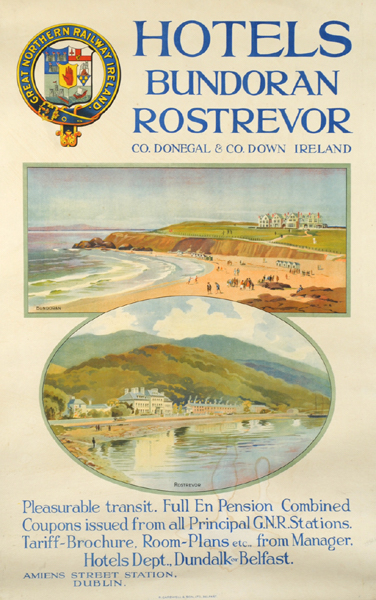 By the time the First World War had ended, the railway company was experiencing difficulties. Increased costs meant that the railway was hemorrhaging money. The cost of coal and raw materials went up. Labour costs also increased due to the imposition of an eight-hour working day in 1919 by the Irish Railways Executive Committee. Partition posed many problems for the railway company. Both governments had different transport policies concerning the railway network. In Northern Ireland, the transport authorities favoured the development of its road network over rail. As the motor car became increasingly popular, fewer people used the trains.

During World War II, the railway once again proved its usefulness. The rationing of items such as petrol meant that goods were once again transported on the rail network. During the Emergency, the local station was used to transport turf cut in nearby bogs to Dublin. The influx of Allied troops into Northern Ireland had a knock-on effect for Bundoran. British and American soldiers regularly crossed the border and came to the town to enjoy some time off. American Military Police were regular sights on the trains at this time. They were always on the lookout for soldiers who had not reported for duty or perhaps enjoyed themselves a bit too much whilst on leave in Bundoran.

The strain of a post-war economy took its toll. By the early 1950‘s the company was in trouble and by the end of the decade it had ceased to exist. The Northern Irish Government closed its lines in 1957. This left small sections of railway scattered throughout the south. A 1956 Seanad report stated that the closure would be a devastating blow for Bundoran which was largely dependent on its tourism industry. An inquiry at the time stated that up to 40,000 Sunday day-trippers go to Bundoran during July and August. Following the closure of the line the Ulster Transport Authority operated a bus service between Enniskillen and Bundoran.

When the Northern railway lines closed the G.N.R began providing bus services. As a result, the buses were full of day-trippers coming from Pettigo, Enniskillen, Clones and Cavan on summer Sundays. After the harvest in September, many people from rural areas would flock to Bundoran.

“Coming down Finner straight was a special moment because as we hurtled along at enormous speed in the shaky old bus, the passengers raised a cheer for the Tricolour flying over Finner Camp…In the early fifties, during a national election, De Valera was due to visit Bundoran on a Sunday night. All the Erne buses lined up opposite the O’Gorman Arms and waited for two hours past departure time to let the Northern passengers have a glimpse of the national hero. We yelled “Up Dev” all the way home that night”.

In 2017, a festival was held to commemorate 60 years since the last train pulled out of Bundoran station. The event was kindly covered by RTE Nationwide and you can watch the clip here.