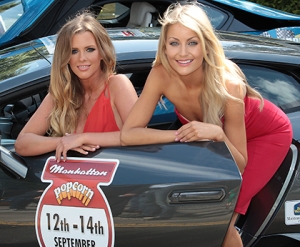 Model Holly Keating and Kerrie Nicole Blanc at Rte Radio Studios in Donnybrook Dublin ahead of Canonball 2014 to raise funds for the make A Wish Foundation .
Pix Brian Mcevoy
No Repro fee for one use

On Thursday September 12th, The Point Village in Dublin will awaken to a spectacular sight as 160 of the finest cars on the planet line up for Cannonball 2014. Ireland’s glitterati, celebrities such as Corrie heartthrob Ryan Thomas and co-star Martin Hancock, Mathew Pritchard from Dirty Sanchez, Shane Lynch, former Miss World Rosanna Davison with hubby Wes Quirke and colourful ‘Cannonballers’ will be out in force for CANNONBALL, the adrenalin-fuelled action-packed Supercar spectacle, which originated in Ireland six years ago and is now the largest organized road trip in Europe. CANNONBALL goes up a gear once again with 160 supercars worth an estimated €25 million. CANNONBALL, sponsored by Manhattan Popcorn, is the largest organised road trip in Europe with most of the world’s top mark cars such as McLaren, Lamborghini, Ferrari, Aston Martin, Porsche, Masseratti, Rolls Royce, Bentley and the new BMW i8. This year CANNONBALL will be more impressive than ever with a quarter of the supercars coming in from the UK, Europe and even Dubai and the highest ever number of top mark cars. Fans can get up close and take pictures from Thursday September 11th at 7pm at the Point Village and on Friday morning September 12th the atmosphere will be electric with a live broadcast from Ryan Tubridy, Nicky Byrne and Jenny Greene from 2FM and a host of celebrities at the official start line. Then the gleaming convoy will drive through 850KM of Irish open roads through Dublin, Cavan, Donegal, Sligo, Mayo, Galway, Tipperary and Offaly from September 12th to 14th.

Over 100,000 people will line the streets as CANNONBALL roars through towns and counties in spectacular style with FREE family friendly festivals all over the country. Each start and finish line at each host town is infused with an electric atmosphere featuring Brazilian dancers, live music, DJs, The Monster Energy JAM Truck, stunt riders, aerobatic displays, local entertainers, confetti cannons, lots of Manhattan popcorn, Cannonball official merchandise and, of course, the unmistakable roar of 160 supercars. CANNONBALL 6 will raise money for the Make-a-Wish Foundation which is a children’s charity that grants magical wishes to children between the ages of 3 – 17 years with life-threatening medical conditions. The route showcases beautiful villages, towns and famous Irish Landmarks to both Irish and foreign Cannonballers and fans. The benefit to the Irish economy of this event is estimated at €2,567,000 and most of this is spread evenly throughout the counties and towns visited.

“Cannonball 6 is set to be one of the most spectacular events of 2014” said Don O Neil of Manhattan Popcorn, main sponsor of Cannonball “ We are very proud to be part of this exhilarating event and to help raise funds for the Make a Wish Foundation. Popcorn goes with all good movies but we are getting the opportunity to bring this mad cap movie to life and there will be lots of Manhattan popcorn on the route to celebrate our association with Cannonball” he continued. The success of CANNONBALL Ireland led to the dawn of the annual Continental Cannonball event every June and this year CANNONBALL made headlines in Holland, Germany and Switzerland as they roared through in spectacular style leaving their mark with the style, excitement and spectacle that CANNONBALL is now becoming renowned for all over the world. The CANNONBALL tour sponsor for 2014 is Carzone.ie and associated sponsors include Paddy Connolly Specialist Cars, 37 Dawson Street, The Bridge House Hotel Tullamore, BP Mitchell, Autokey.ie, Best Western Montenotti, 4×4 Exports and AB Signs. See www.cannonball.ie for further details, routes and events.