We are blessed in Bundoran to have a large creative talent who give back to their town when they can. Many of our local artists have created wonderful murals which are on display at various locations throughout the town. Here’s your guide to Bundoran’s murals! 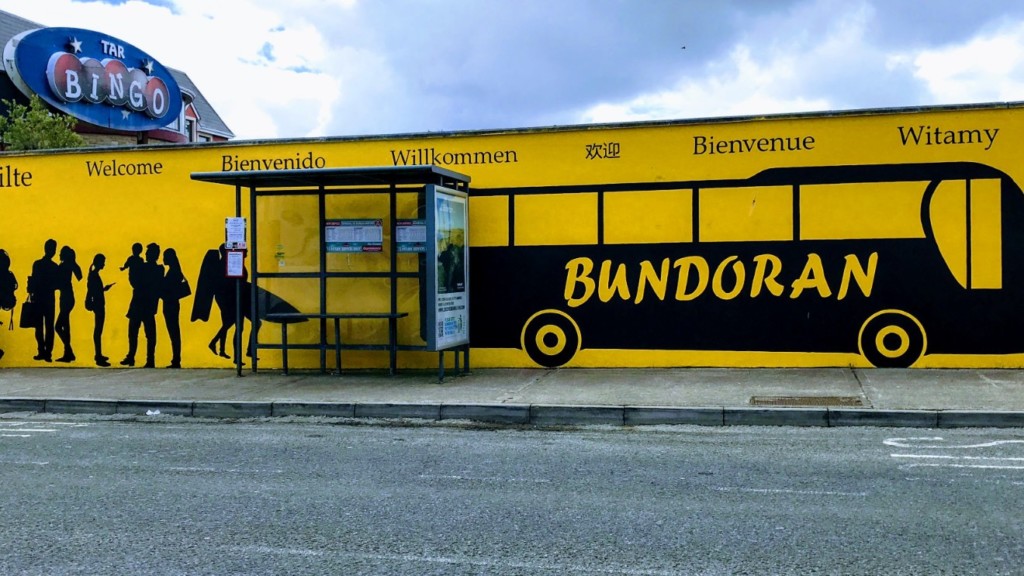 Artist John Deegan was commissioned by Bundoran Tidy Towns Committee to create a ‘Welcoming’ mural on the wall located at East End Bus Stop. John explained: “This was a difficult commission due to the obstruction of the bus stop shelter in the centre of the wall. Therefore I decided that I had to incorporate the shelter into the art. I ultimately want people to get my art at a glance. I came up with the design of the bus in order to transform the wall into a functioning piece of art. I then had to reassure the committee that my idea, although bold, would work. I was delighted with the finished project and the response of the local community. Indeed, one person even commented that my design literally stopped traffic!” 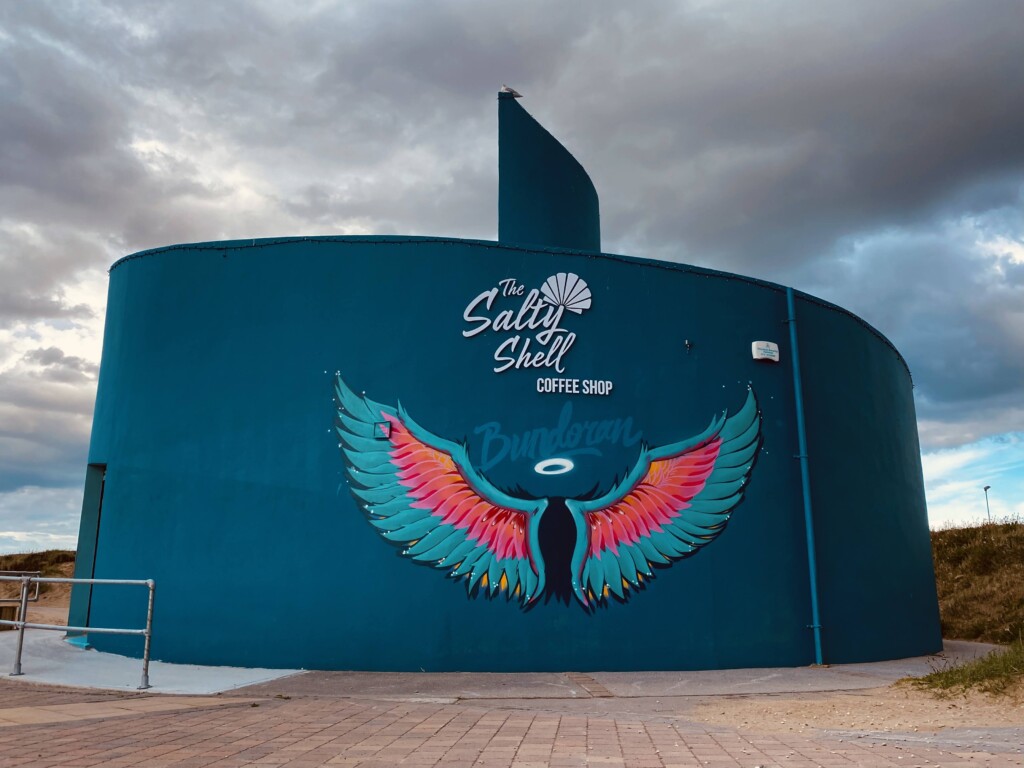 Brand new for 2021 this mural was designed and installed by Karl Porter of UV Arts and sponsored by Irish Gap Year. Karl is also famous for painting the Derry Girls mural in Derry. Bundoran Tourism Officer Shane Smyth adds ‘once I saw the popularity of these Angel Wings in their various forms I knew they would go down well in Bundoran and become particularly “instagrammable”. Thanks to everyone who made this happen.

Music is a huge part of the culture and tradition of Bundoran.  The song the town is probably best known for is Beautiful Bundoran sung by Kathleen Fitzgerald. The song was made even more famous when it was performed by Sinead O’Connor in the movie “The Butcher Boy”.  The mural with the lyrics to the opening line was painted as part of the Community Challenge Day held on Saturday February 17th 2018 and will be part of a musical timeline (yet to be completed). The location is appropriate as it leads towards the site of the old Astoria Ballroom and the current site of the annual Sea Sessions Surf and Music Festival.

The big wave mural was added to the gable of Madden’s Bridge Bar in 2018. It was commissioned by the bar due to its proximity to Bundoran’s famous “Peak” surf break which it overlooks in Donegal Bay.

Artists: Transition year students of Magh Ene College during the school year 1999-2000
Location: Behind the Tourist Office, The Bridge, Bundoran. 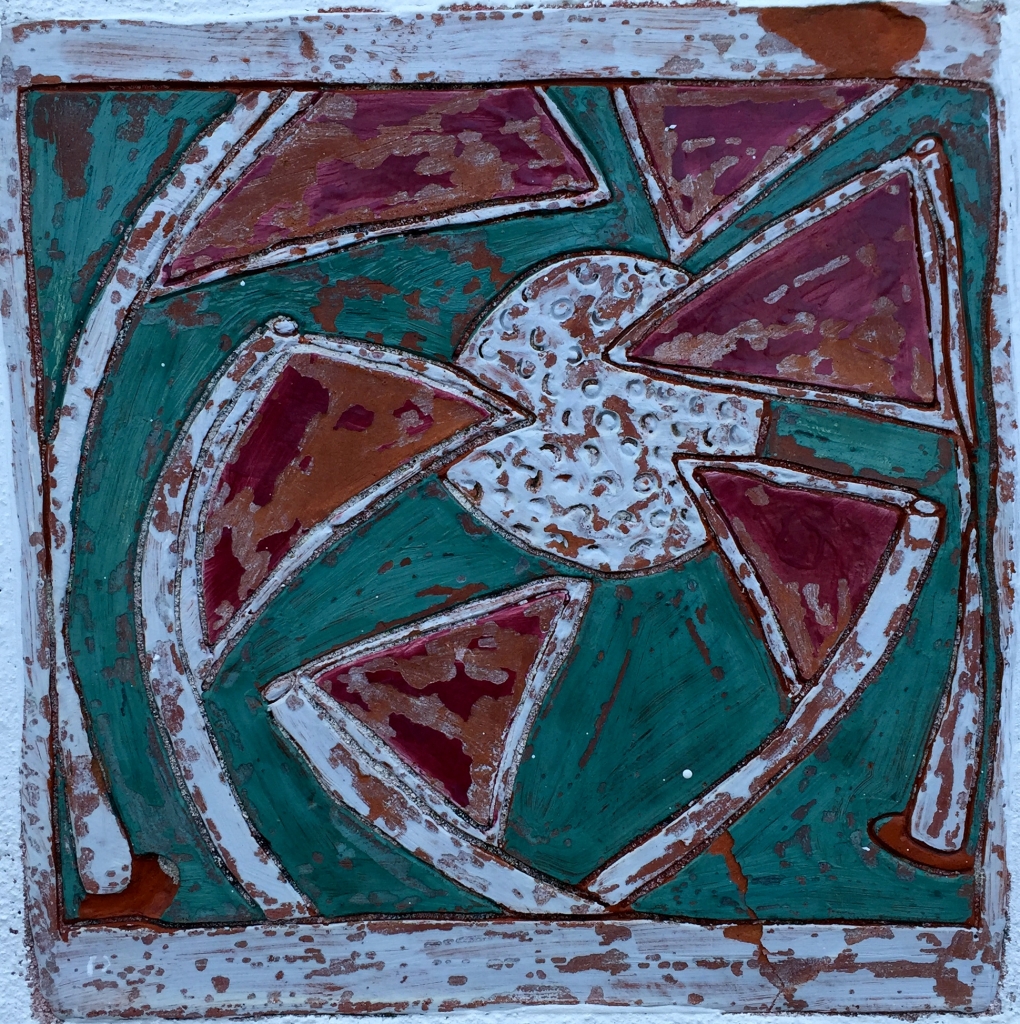 These works were commissioned by the former Bundoran Town Council and were completed by Transition year students of Magh Ene College during the school year 1999-2000.  14 tiles with a seaside/marine theme were cemented into the walls around the tourist office. The rest can be viewed here 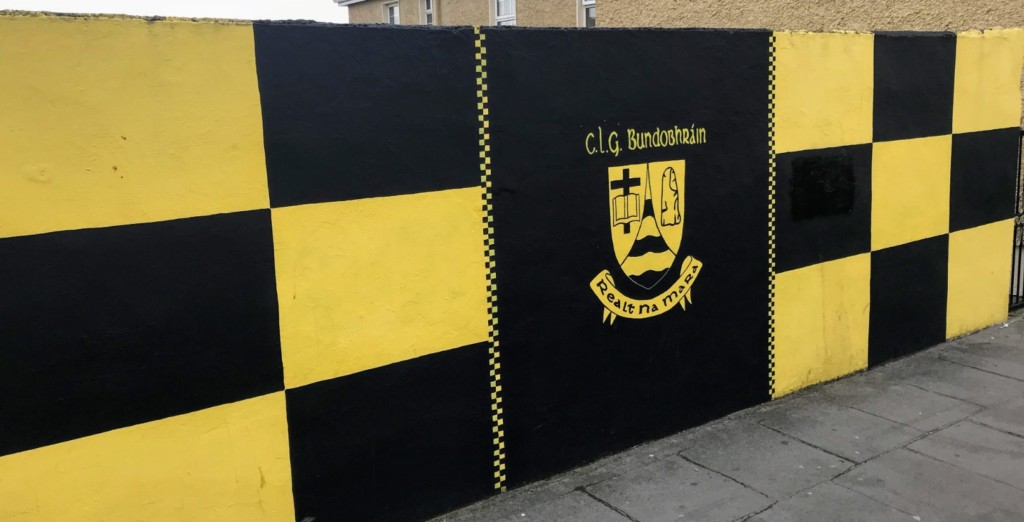 This was a second commission for artist John Deegan by the Hourihane family. The wall firstly displayed the Donegal colours in 2012 when the team reached the all Ireland final. The family, who are an integral part of local GAA, then had the wall transformed to display the local club crest. The crest is the town crest in the black and amber colours of the team. The crest depicts a cross and book signifying the Annals of the Four Masters, the waves signify the Atlantic Ocean and the third image is a standing stone located at Magheracar, just outside the town. 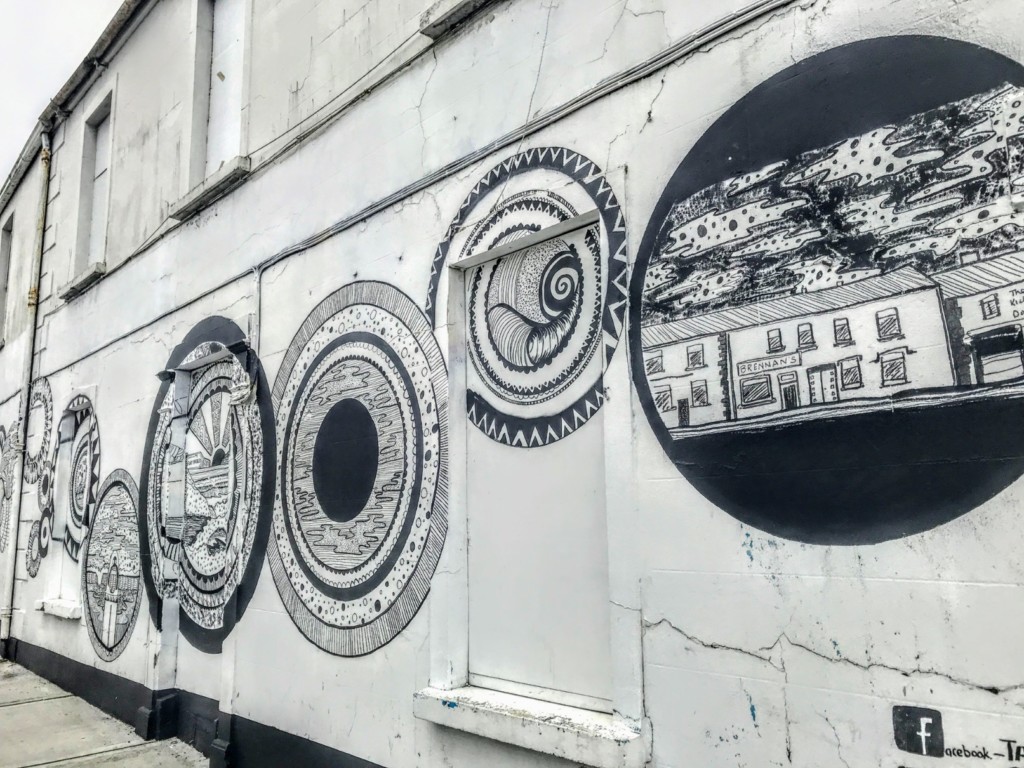 Our next mural was another of the murals completed as part of the Tidy Towns project in February of 2018 and painted by local artist Tara McGuinness. It is painted on the site of the old Bundoran Town Council office at the junction of Main Street and Astoria Road. Tara says “The mural is called “connected” my abstract interpretation of Bundoran through Celtic style black and white design – the idea was the connection of the circles represents the connection of the community to the landscapes and scenery of Bundoran.”

The pac man mural at the old Pages Amusements

Artist John Deegan agreed  to volunteer as part of the Bundoran Tidy Towns clean up project. He was tasked with the building formerly known as Pages’ Amusements. John states “Many locals will have fond memories of Ronnie and Molly Page. I wanted the mural to reflect the era and this is why I chose Pacman” 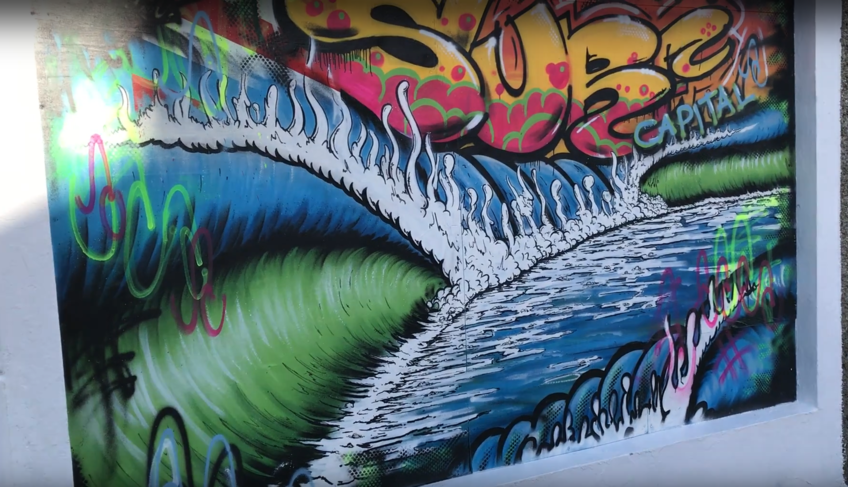 The Surf House located at East End has been updated since it was first completed in 2014. Artist Gavin McCrea puts his unique stamp on the building filling the windows with his surf art. The main window has the mural above. The remainder of the windows in the building are complemented with surfboards, again featuring unique surf art. Gavin says ‘It is referencing the ocean, surfboards manufacture and the toxic materials used in the process. Attempting to draw attention to water pollution around our seas and the need for cleaner seas. The paint drips and smears and the darker colour pallette all referencing polluted water.’ 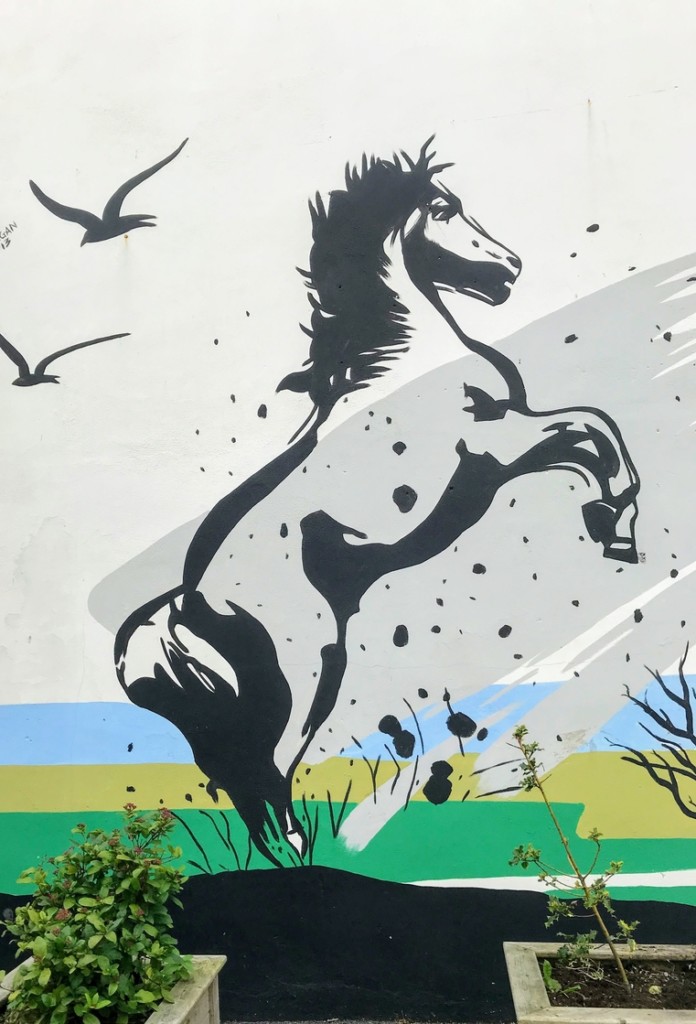 The horse mural at the West End

This is another commissioned piece by Artist John Deegan. John was approached by West End Development Committee in 2013 and asked to produce a mural on the end gable of this house. John describes the background to this piece: “The family that volunteered the wall for the mural are well known for their love of horses. The committee asked me to design a horse themed mural. I wanted to create a mural that would demonstrate the power and majesty of this animal which is deeply embedded in our culture and mythology.

Translate »
Loading Comments...
Comment
×
We use cookies to ensure that we give you the best experience on our website. If you continue to use this site we will assume that you are happy with it. If you want to read more about how we use cookies, please click Read More to view our privacy statement.OkRead more
Go to Top