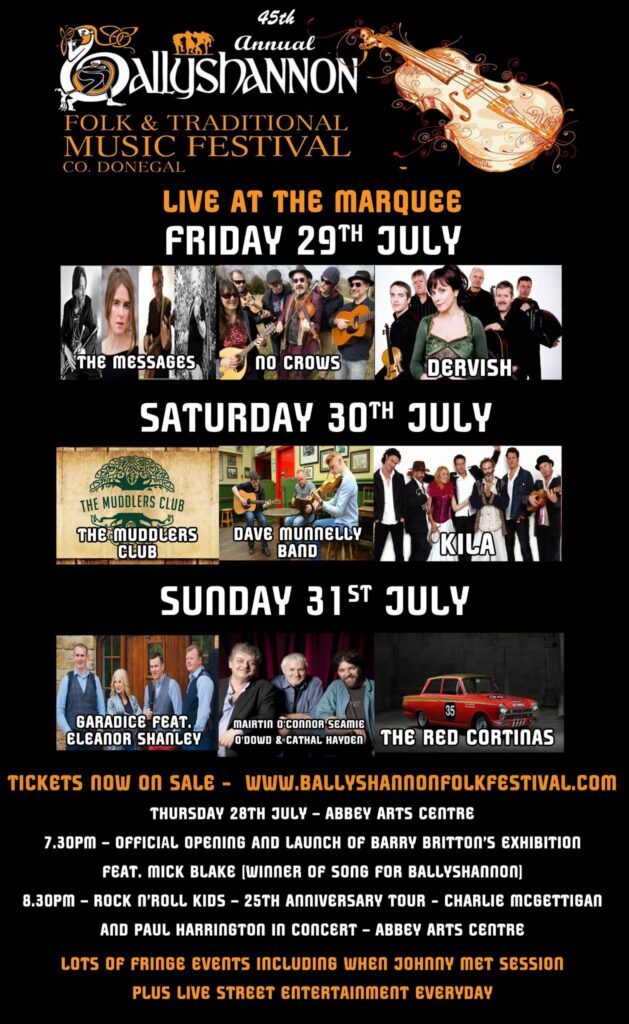 Ballyshannon Folk and Traditional Music Festival was born in 1978, it is the oldest festival of its genre in the world and for the past 44 years has welcomed thousands of visitors annually to the town on the August bank holiday weekend. It is run on a voluntary basis by a team of experienced festival organisers. Our vision for the festival has always been a celebration of all aspects of Irish Folk and Traditional music. We also pride ourselves in showcasing emerging musicians in the genre. In 2022 we will celebrate our 45th annual festival and we look forward to welcoming visitors back to the banks of the Erne, Ballyshannon.

Thursday 28th July – Launch and Opening event of this years festival in the Abbey Arts Centre.

Lots of fringe events including Where Johnny Doherty Meets

In the sixth of the series of LEGEND SESSIONS a tribute session of two musical greats who, although no longer with us in this life continue to have a major influence on our musical heritage, will be hosted. This year Sandy Denny (Fairport Convention) will be joining the music of Donegal fiddler, Johnny Doherty who died in the Rock Hospital in Ballyshannon in 1980.

This gig attempts to create the session that might have taken place if they had travelled through time and space to Ballyshannon. This year’s session will be recreated by Cathy Jordan (Dervish) and Seamie O’Dowd and really will be one not to be missed!

Add to the mix some great Street Entertainment all weekend, a range of workshops and fringe events