The Real McCoy THIS EVENT IS NOW CANCELLED

THIS EVENT IS NOW CANCELLED 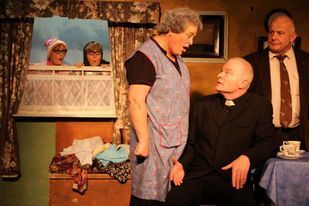 The Crokey Players 10th Anniversary Tour of Ireland presenting : Its The Real McCoy

Ten years ago ‘It’s The Real McCoy’ hit the stage for the first time and became a phenomenal success across Ireland, the UK and America.

Set in rural Ireland in the cottage of Madge Molly it’s simply hilarious!  With dozens of funny one-liners and numerous twists and turns, Madge has to contend with nosey neighbours, a gormless postman who wants to marry her only daughter, a priest with a tale of her past and a wayward husband who wants to meet her to explain why he vanished without trace almost 40 years ago!  Experience the confusion and the comedy as ‘Its The Real McCoy’ plays The Abbey Arts Centre Theatre as part of its 10th Anniversary Tour of Ireland.

Written and directed by Tommy Marren.