In the Midst of Plenty 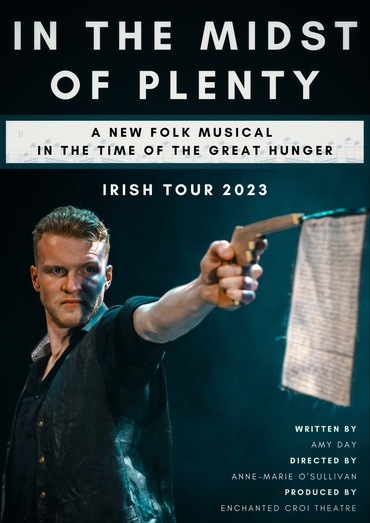 In the Midst of Plenty

“In the Midst of Plenty” is a new folk musical set during the height of Ireland’s Great Hunger. The show is embarking on an Irish tour in 2023 after recently debuting to glowing reviews among sell-out crowds in Strokestown Park and the Roscommon Arts Centre. The piece traces the stories of friendship, betrayal, eviction, and emigration among families living on the Strokestown estate. The characters’ stories are set amidst the real-life plot to murder Strokestown landlord Denis Mahon. Audiences are presented hard questions about what it meant to survive the most harrowing chapter in Ireland’s history. Images of original Famine documentation and artifacts have been imaginatively woven into sets and costumes. “In the Midst of Plenty” features an original score of contemporary acoustic folk music and is performed by a cast of professional actors led by Julie Sharkey, Martin Gilligan, and Fia Rua. The live folk band includes renowned trad fiddler Neil FitzGibbon and acclaimed folk artist Gráinne Hunt.

Written by playwright/composer-lyricist Amy Day, the show is produced by Enchanted Croí Theatre under the Artistic Direction of Anne-Marie O’Sullivan. The production is supported by the National Famine Way and was developed with funding from the Roscommon County Council Local Live Performance Scheme and the Department of Tourism, Culture, Arts, Gaeltacht, Sport and Media.

What People Are Saying:

“An amazing piece. . .Real and gritty, moments of love, moments of pain, moments of parenting, moments of laughter, moments of revenge and moments of heartbreak. . . Every last member of the audience rose to their feet spontaneously at the end. A piece with what it means to be human at its very heart.” ~ Caroilín Callery, Director, National Famine Way

“Amy Day’s astute reading of the Famine is evident in the musical’s narrative. Just as the historian does, Amy Day has asked questions of the documents and accounts of the Famine, providing great insight into the lives of women, cottiers, and those on the margins.” ~ Dr Ciarán Reilly, historian of 19th and 20th Century Irish history, Maynooth University

“At a time when women’s rights were inconsequential and unconsidered, the writer has brought the audience right into the heart of an Irish family.” ~ Jonathan Cassidy, Strokestown Town Team

“Every member of the audience realised we had just witnessed a wonderful, historically accurate creative production.” ~ Cllr. Joe Murphy

“This musical was stunning, brought tears to my eyes. The performances were faultless, the musical magical.” ~ Paula (audience member)

“Two days later I am still remembering this unbelievable work of art. The songs, the acting, the story. Truly unforgettable.” ~ Dee (audience member)

“It will evolve into something the whole world knows.” ~ Olwyn (audience member)

“The costuming and use of symbolism throughout was very clever – a truly creative production.” ~ Catherine (audience member)

“A powerful, engaging, and insightful show that captures the imagination from start to finish. The music, acting, staging, and performances were wonderful. . . Everyone should see it!” ~ Mags (audience member)

“The enthusiasm and dedication of the actors was infectious, and carried the audience along to the last memorable scene.” ~ Marie (audience member)

“The attention and care that was shown to the symbols of this national tragedy was exquisite.” ~ Kieran (audience member)

“It may become a masterpiece of our time.” ~ Peter (audience member)

“Fantastic musicians, actors, a haunting experience and one I will never forget.” ~ Sarah (audience member)